Election for 8 seats of Gujarat Assembly on November 3: Counting of votes on November 10 | Government Notification

Election for 8 seats of Gujarat Assembly on November 3: Counting of votes on November 10 | Government Notification :- 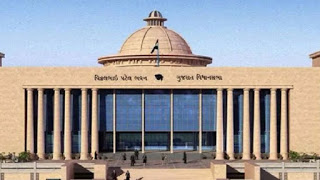 By-election manifesto will be published on 9th October: Last day for filling up of nomination forms on 16th October, verification of forms on 17th, Forms can be withdrawn by 15th October.

Six Congress MLAs had resigned ahead of elections in June for four vacant Rajya Sabha seats in Gujarat.  Due to which the dates of by-elections for 6 different vacant seats of Gujarat Legislative Assembly have been announced by the Central Election Commission today.  Voting for the by-elections for 9 seats will be held on November 9 and counting of votes will take place on November 10.  Apart from Gujarat, elections will be held on November 9 for 8 assembly seats in different states and for Valmiki Nagar Lok Sabha seat in Bihar.

The Central Election Commission has announced the dates for the vacant Assembly and Lok Sabha by-elections in different states of the country.  In which by-election dates have been announced for Kaprada, Dang, Limbdi, Gadha, Dhari, Morbi, Karjan and Abadsa seats of Gujarat Assembly.  The manifesto for the by-elections will be published on October 8.  The last date for filling up the subscription form is October 15.

The verification of the subscription form will be done on 15th October while the subscription form can be withdrawn by 15th October.  Voting for the by-elections will be held on November 9 and counting of votes will be held on November 10.  The entire election process will be completed on November 14, the day of Dhanteras.  In addition to the eight Gujarat Assembly seats, by-elections will be held for eight seats in states including Chhattisgarh, Haryana, Jharkhand, Karnataka, Madhya Pradesh, Manipur, Nagaland, Odisha, Telangana and Uttar Pradesh. Now PM of indian shree narendra modi. his party of BJP.


Prior to the four Rajya Sabha sittings held in the state in June, six Congress MLAs had resigned.  Jitubhai Chaudhary from Kaprada seat, Mangal Gavit from Dang, Soma Ganda from Limbdi seat, Pravin Maru from Gadda seat, JV Kakadia from Dhari seat, Brijesh Merja from Morbi seat, Akshay Patel from Kaprada seat and Pradyumansinh Jadeja from Abadsa seat.  Eight resigning assembly seats have fallen vacant.  In eight of the eight seats, the BJP is likely to give tickets to former MLAs who resigned from the Congress and wore saffron, while the BJP itself is in a dilemma over the choice of candidates for the other three seats.  BJP has appointed seat-wise in-charges for all the six seats, including Minister Ganpat Vasava and MLA Puneesh Modi in-charge for the Dang seat, Bharat Parmar and Ishwarsinh Patel for the Kaprada seat, Pradipsinh Jadeja for the Karjan seat and Shabdasharan Brahmbhatt for the Abad seat.  Bhupendrasinh Chudasama and KC Patel, IK Jadeja and Saurabh Patel for Morbi seat, Dharmendrasinh Jadeja and Dhansukh Bhanderi for Dhari seat, Gordhanbhai Zadafia and Kunwarjibhai Bawliya for Gadda seat and R. Sifaldu and Nitinbhai Bhard for Limbdi seat.  Has been appointed.  With the announcement of the by-election dates for the eight seats today, the code of conduct has come into force in these eight assembly constituencies. now parliament of modi sarkar. and government control under rupani's sarkar .


By-elections for eight seats have been announced today.  Polling will be held on November 9 and counting of votes will be held on November 10.  Welcoming the announcement of the by-elections, state BJP president CR Patil said that the BJP has already formulated a strategy before the by-elections.  And have made most of the preparations.  The BJP will definitely win these eight seats.  Expressed such determination.  The entire process of by-elections will be conducted in such a way that social distance is maintained amid the epidemic of by-elections.  Preference will be given to youth and new faces in the BJP's organization.  Meanwhile, BJP leader Pradyumna Singh Jadeja said that the BJP would win this by-election with a huge majority and that they too would get a ticket.  Regarding the by-elections, Brijesh Merja said that every worker of the Bharatiya Janata Party works together.  Therefore, only the BJP will win.  He said the BJP would try to win the candidate it decides.


People will betray those who betray the people: Amit Chavda


By-election dates have been fixed for eight state seats today.  He was welcomed by Pradesh Congress President Amit Chavda and hoped that the Congress would win all the seats.  He further said that the selection process of candidates by the Congress party is still going on.  Chavda said that under the BJP rule, hooliganism has increased and those who betray the people will be punished by the people.  There was also talk of a new law on agriculture.  The new law on agriculture will end the APMC system.  So at present all the farmers are rejecting it.  Laws that hurt farmers have sparked outrage across the country.  Opposition has erupted which will have an impact in this by-election.  In the end, he made it clear that the Congress would win all the seats in the by-elections announced today.


By-election dates have been announced for the 4 vacant seats in the Gujarat Assembly. The election manifesto will be published on October 3.  Forms can be filled up till October 15.  Voting for the by-elections will be held on November 9 and counting will take place on November 10.  November 17 is Diwali.  Then, just four days before Diwali, it remains to be seen whether the results of the by-elections will explode on the BJP's premises or the Congress' house will explode.  Because in all the eight seats for which by-elections are held, the Congress candidates won in 2012 with a huge lead.  It remains to be seen in whose yard the crackling or fireworks take place before Diwali.


The current term bodies of 9 Municipal Corporations of the state including Rajkot are being completed in the month of December.  Apart from this, the term of District Panchayats and Taluka Panchayats is also coming to an end in December.  The by-election vote and its outcome will tell the minds of the voters and also give indirect indications of who will come to power in the local self-government elections.  The results of the by-elections for the eight seats will not affect the balance of power in any way, but if the BJP wins all the seats, its power will be stronger and if the Congress wins, it will not be in power.  But the result of the by-election is being considered as the pre-election semi-final of the local self-government.  The result will also inspire activists, so both parties will struggle to win the election.


With the resignation of these 6 Congress MLAs, the burden of by-election expenses on the people.
For more job updates, educational updates, gujarat latest updates visit GkJobs Daily.


Elections were held in Gujarat this year for the four vacant Rajya Sabha seats.  According to the number of members in the assembly, both the BJP and the Congress were likely to get two seats each.  But the BJP pursued a policy of compromise to retain three Rajya Sabha seats at any cost.  In March, three Congress MLAs resigned and then in June, six MLAs resigned.  Among them are Congress MLA Jitubhai Chaudhary, Dang MLA Mangal Gavit, Limbdi MLA Soma Ganda Patel, Gadda MLA Pravin Maru, Dhari MLA JV Kakadia, Morbi MLA Brijesh Mercha, Kaprada MLA Akshay Singh MLA and Kaprada MLA Akshay Singh  Resigned.  The BJP has managed to win three seats in the Rajya Sabha elections, but with the resignation of six Congress MLAs due to the politics of sabotage, the people of Gujarat have been burdened with crores of rupees in the by-elections for the three Assembly seats.  There are fears that the transition will spread further when the elections for these eight seats will be held between the Corona periods.
For more job updates, educational updates, gujarat latest updates visit GkJobs Daily.


When the by-elections for the eight vacant seats in the Gujarat Assembly are to be held on November 9, the first ordeal of the ruling party's newly appointed state president Navsari MP CR Patil will take place.  Elections for 6 Municipal Corporations, different District Panchayats and Taluka Panchayats are also to be held at the end of this year.  In which Patil's responsibility is to fly the BJP's victory flag everywhere.  In all the eight assembly seats for which by-elections are to be held, the Congress candidates won the 2014 general elections with a huge lead.  In this, CR Patil will have to face the challenge of making the BJP candidates win this eighth seat. For more job updates, educational updates, gujarat latest updates visit GkJobs Daily.


Patil, who has little experience in the organization, will have his first ordeal in the eight-seat assembly by-election.  If they fail, it will be a big challenge for them to re-establish the BJP in all the Municipal Corporations, District Panchayats and Taluka Panchayats in the local body elections.  The transition to Congress in the state is currently on the rise.  While it is natural that a large public meeting should not be allowed for a by-election, Patil will have to devise a strategy to win the election behind closed doors.  Less experience of organization will increase the difficulty for them. For more job updates, educational updates, gujarat latest updates visit GkJobs Daily.