Friday, September 4, 2020
Bagikan :
Tweet
Gandhinagar, Friday: Deputy Chief Minister Nitinbhai Patel said that the sale, storage and distribution of gutka as well as tobacco or nicotine-containing pan masala is currently banned in the state. The state government has decided to extend the ban for one more year to improve the health of the citizens. 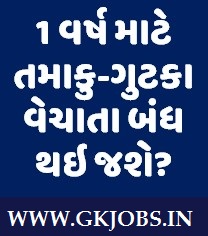 The Deputy Chief Minister added that the ban has been imposed under the rules and regulations under the Food Safety Standards Act-2006 and Regulations-2011.

Shri Nitinbhai Patel further added that the ban on sale of cigarettes and substances containing tobacco or nicotine within a radius of 100 meters of the educational institution is being strictly enforced by the administration.
In this regard, in the last three years, about 10 thousand firms have been investigated by the Food and Drug Regulatory Authority of the Health Department and fine of Rs 11 lakhs has been imposed.