The historic five-day monsoon session of the Gujarat Legislative Assembly has begun. The legislature saw a complete social distance. In addition to the House, the MLAs took place in the Prakshak Gallery as well as an the MLAs wearing masks on their faces. In the second meeting,Latest News, jobs Updates, Technology Tips and General Information Updates, remain with us GkJobs Please share with your companions this Post. 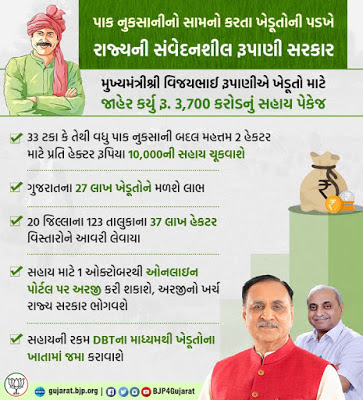 which started in the afternoon, the Rupani government announced an aid package of Rs 3,700 crore for farmers.

in a statement under Rule-44 on the first day of the seventh session of the 14th Legislative Assembly as the Leader of the Assembly, Chief Minister Vijay Rupani said that the Gujarat faremrs relief package Announced.

An areal of 37 lakh hectares will be eligible for assistance:

The state government has repeatedly announced that the state government was considering providing assistance to farmers in the state In case of crop loss of 33 per cent and above. Out of the estimated 51 lakh hectares of planted area in 123 talukas of 20 districts of the state. an estimated 37 lakh hectares will be eligible for assistance as per the aid norms after conslderlng the assessment of the survey conducted by the Agriculture Department on September 19 damage In some talukas in kharif season this year.

For 2 hectares Rs. 10 thousand per hectare assistance In case of crop loss of 33% and above, a maximum of Rs. 10 thousand per hectare assistance wlll be paid. In addition. no matter how little land the farmer has, he should be paid at least R9. The state government has decided to pay Rs 5,000. The assistance package will benefit an estlmated 27 lakh farmer account holders in the state. Not only that, if there is an assessment of crop damage in other talukas of the state, the state government will also consider it.