Beranda » News » No Schools Until After Diwali? Parents Say Safety First | The Decision Will Be Taken Based On Corona's Condition After Diwali

No Schools Until After Diwali? Parents Say Safety First | The Decision Will Be Taken Based On Corona's Condition After Diwali

Wednesday, September 16, 2020
Bagikan :
Tweet
No Schools Until After Diwali? Parents Say Safety First | The Decision Will Be Taken Based On Corona's Condition After Diwali | GKJOBS.IN 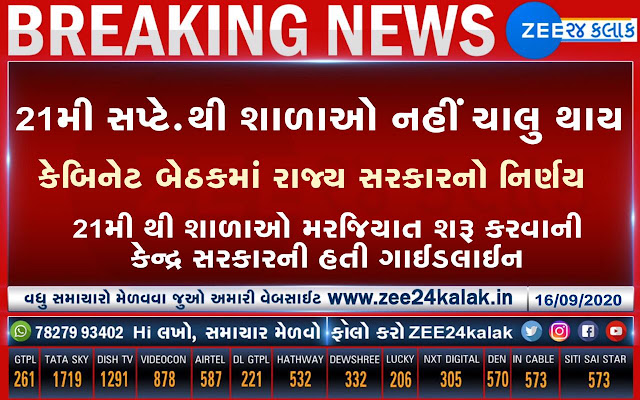 In the case of Corona, the government said that the education department would consider starting schools based on the situation in Corona in the state after Diwali.

Everything is slowly unlocking in Unlock. What has not opened is the school. On which many questions have been raised. Every parent is tormented by the question of when the schools will finally open. Then the education department of Gujarat government has taken an important decision. He said the government would consider starting primary and secondary schools in Gujarat only after Diwali. In Corona's situation, the government said the education department would consider starting schools based on Corona's situation in the state after Diwali.


https://www.facebook.com/zee24kalak.in/videos/959406184544868/The situation will be seen after Diwali
Schools are likely to open in Gujarat after Diwali. There has been a long-running debate over when the school will reopen amid the Corona epidemic. Many questions were raised. But now this has come to an end. Due to the way the cases of Korona are increasing, the education department has taken an important decision that this will not be considered till Diwali. Even after Diwali, the decision will be taken keeping in view the situation.

Give Mass Promotion to Students - Board of Governors

Naresh Shah, President of the Board of Guardians, said that in view of the growing number of children in Gujarat, it is not advisable to send children to school. Children in grades 1 to 8 have a fragile immune system. Therefore, even after Diwali, the parents are not in favor of opening the school. One session is over now, and the next session is going to see how the school goes. Therefore, mass promotion should be given to children of 1st to 8th standard. At the same time, mass promotion should be given to 9th and 11th standard. Only standard 10 and 12 exams should be taken.


Schools closed in the state from March 16Earlier, at the time of Corona's entry into Gujarat, i.e. on March 15, the state government had decided to close all school colleges and educational institutions in Gujarat for two weeks from March 16 to March 29. However the board exams were kept unchanged. The school vacation was then extended as Corona became uncontrollable. Thus schools have been closed for about 6 months.

Consideration to reduce the curriculum by the Department of EducationNow, if schools start after Diwali, it will be impossible to complete a two-semester course in one session. So the state education department is also planning to reduce the curriculum in that situation. The curriculum will be reduced based on how many days of study the students get, the sources said. However, this cannot be decided at present. It will be decided on the basis of the remaining days of study after the commencement of schools.

Even if the children go to school, these things have to be taken care of. 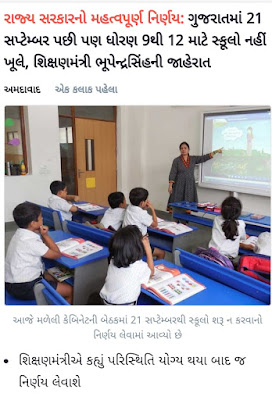 2. There must be a distance of 6 feet between two people.

4. Take care of your health.

5. You will be asked to download the Health Bridge app where necessary.

6. Have to wash your hands after a while.

7. Hands should be washed even if they do not look dirty.

8. Permission to study online will continue, it will be encouraged.

9. Children will go to school of their own free will. But parents must consent in writing.

10. There will be strict restrictions on sports activity and assembly.

13. Only schools outside the containment zone will be allowed to open.

14. Students, teachers and staff going to school must avoid going to the containment zone.

15. The gym can be used only on the basis of guidelines, but the swimming pool will be closed.

16. School management will be responsible for providing face mask, head sanitizer to teachers and staff.

17. The employee involved in cleaning should be given a thermal gun, disposable paper towel, soap, 1 per cent sodium hypochlorite solution.

18. The arrangement of the pulse oximeter should be mandatory, so that the oxygen level of the anisotometric can be checked.


19. There should be a covered dustbin and proper disposal of waste.
20. Sweepers must be properly trained before being hired.

21. Students will not be able to exchange books, copy of study material, pencil, pen, water bottle.

22. At the time of practical, the student will go to different sections. Large numbers of students cannot be taken to the laboratory at the same time.