Play FAU-G, not PUBG: Akshay Kumar launches FAU-G gaming app alternative of PUBG, will give 20% revenue to soldiers. by gkjobs.in 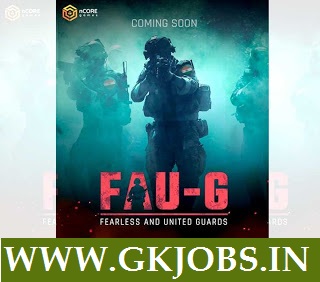 The government recently banned pubs.  Now Bollywood star Akshay Kumar has come up with a new gaming app in front of PubG.  Akshay Kumar recently tweeted about this.
What did Akshay Kumar tweet?
Akshay Kumar tweeted, “I am proud to launch the action game Fearless & United Guards FAU-G, under the Prime Minister’s self-help campaign.  In addition to entertainment, the players of this game will also learn about the sacrifices made by our soldiers.  20% of the total revenue from this game will be donated to the Bharat or Veer Trust created for our soldiers.
The game was developed by Bengaluru-based mobile game publisher n-CORE.


Akshay Kumar's game is a top trend on Twitter.  More than 20,000 tweets were received in just one hour of India Trending.

PubG is one of the most popular mobile games in many countries, including India.  The app has been downloaded 175 million times in India.

PubG was developed by South Korean video game company Bluehole.  However, Chinese multinational Tencent has a stake in it.
PubG had also been on target before.  Parents were very upset because of the habit of many children.  Some states even temporarily banned it.
PubG then assured that he would create a safe ecosystem by taking the views of parents, educators and government organizations.
5 crore users of PubG in India, revenue 22 thousand crore
PubG has more than 50 million users in India, of which approximately 35 million are active users.  According to data analyst firm Censor Tower, PubG revenue for the first six months of this year is estimated at Rs 9,700 crore.  Remained.  Its total revenue so far has crossed Rs 22,000 crore.  India was the largest contributor, with India having the highest number of downloads out of 175 million downloads in the world.
Tag : App Tech