Oleh Gk Jobs
Sunday, September 13, 2020
Bagikan :
Tweet
Road Safety New Rules Declared For Two Wheelers Must Read For All Two Wheelers | News:-  The central government has changed the rules for road safety. Some new rules have also been created. The ministry recently announced new guidelines for two-wheelers. According to media reports, a hand hold behind the driver's seat on both sides of the bike will become mandatory. Its purpose is to protect the people sitting in the back. So far most luxury bikes do not have this feature. In addition, footrests on both sides have been made mandatory for bike riders. 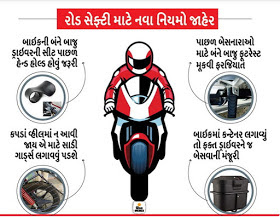 Apart from this at least half of the left side of the rear wheel of the bike must be securely covered with sari guards. So that the clothes of the people sitting in the back do not get entangled in the rear wheel. Now any bike registered with the RTO office must follow these safety rules.

The ministry has also issued guidelines for placing light containers in bikes. The length of this container should not exceed 550mm, width 510mm and height 500mm.


If the container is mounted on the back seat, only the driver will be allowed to sit. That is, no one else will be able to sit on that bike. The government will change these rules from time to time.

The government has also recently issued new guidelines on tires. Under this it is advisable to have a tire pressure monitoring system for vehicles weighing a maximum of 3.5 tons.