GkJobs » Tanpa Label » This mistake has hit 46 lakh farmers hard! Rupees did not come in the account, read here, what can be done now? | Report | Gkjobs.in

This mistake has hit 46 lakh farmers hard! Rupees did not come in the account, read here, what can be done now? | Report | Gkjobs.in

Oleh Gk Jobs
Bagikan :
Tweet
This mistake has hit 46 lakh farmers hard! Rupees did not come in the account, read here, what can be done now? | Report | Gkjobs.in 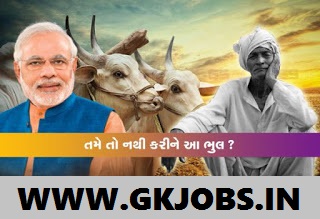 20 months of PM Kisan Samman Nidhi Scheme, the largest government scheme for farmers, have come to an end.  More than 46 lakh people have failed payments due to lack of spelling, bank account number or Aadhaar seeding at this time.  Most people failed to pay in the first installment.  Since then, the number of such people has been steadily declining due to increasing awareness.
According to an official of the Union Ministry of Agriculture, the names, mobile numbers and bank account numbers of the applicants have been tampered with on a large scale.  Among the states, Maharashtra, Madhya Pradesh and UP are at the forefront.  Due to this, if you want Rs 6000 for cultivating farmers, be careful while filling the form.  Otherwise the money will not come even after the application.

If the spelling of the name in the bank account and other papers is different, the money will not come because the payment system in the scheme is automatic.  He will reject it.  At present the sixth installment of the scheme is being sent at Rs.2000.  An analysis of each installment reveals that 46,13,797 farmers have failed their payments.  While a fund transfer order has been generated for them.

According to sources in the Union Agriculture Ministry, the highest installment of 46,13,797 people failed in the first installment.  46,13,797 in the second, 8,53,721 in the third, 10,51,525 in the fourth, 31,774 in the fifth, while 1,68,183 payments have failed so far in the sixth installment being sent.  It is a 100 per cent central government funded scheme but the farmer's money is received when the state government sends the farmers to the center after verifying the data.  Because revenue is a matter for the state government.

This is the big reason :


How can a mistake be corrected? :

First go to the official website of PM-Kisan Scheme.  Go inside its former corner and click on Edit Aadhaar Details option.

You will have to enter your Aadhaar number here.  Then enter a captcha code and submit.  As shown below.
If your name is just wrong, then you can fix it online, depending on the application and your name.  If there is any other mistake, you can contact your accountant, bank and agriculture department office.