Beranda » Online Test » Understand what has changed in 73 years in graphics: In 1947, the price of 10 grams of gold was less than Rs 89, today not even 2 liters of milk come from it.

Understand what has changed in 73 years in graphics: In 1947, the price of 10 grams of gold was less than Rs 89, today not even 2 liters of milk come from it.

Understand what has changed in 73 years in graphics: In 1947, the price of 10 grams of gold was less than Rs 89, today not even 2 liters of milk come from it. 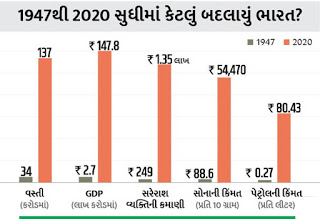 India's population has quadrupled in 73 years, from 340 million at independence to more than 137 million now


Today you earn Rs 249 in a day.  Or spend more than that, but that was the annual income of the average citizen at that time.  The country has changed in many areas in the last 73 years.  What was the situation in the country at the time of independence and what is it today?  Here is the detailed answer ...


1. How much has the population of the country increased in the last 73 years?


When we got independence from the British in 1947, the population of the country was only 34 crores.  The first census was taken in 1951 after independence.  At that time, the country's population had grown from 34 to 36 crore.  At the time of independence, India's literacy rate was only 12 per cent, which also increased to 18 per cent by 1951.

The last census was taken in 2011.  At that time the population of the country was over 121 crores.  The literacy rate also rose to 74 percent.  In other words, at the time of independence only 12 per cent of the people in the country could study, now it has increased significantly.

In addition, Aadhaar card issuing body UIDAI also releases population statistics from time to time.  Accordingly, by May 2020, the country's population has exceeded 137 crore.  Now, if you do the calculations, it can be said that the population of the country has increased 4 times since independence.

There is also an assumption that by 2050, India will be number one in the list of the world's most populous countries.  Will be at 1.  At present, India ranks second after China.

2. How much has the country's GDP increased in 73 years?

GDP is the most basic measure of a country's economic potential.  It is said that when the British came to India, India's share in world GDP was 22%.

But since independence, India's GDP has grown more than 55 times.  GDP in 2019-20 is estimated at 147.79 lakh crore.  Today, India is the 5th largest economic power in the world and accounts for more than 4% of the world's GDP.

3. How much did the average Indian earn in 73 years of independence?

Today, even a well-planned mobile recharge for Rs 249 is not available.  Some people's daily expenses are more than Rs 249.  But when the country became independent, the average annual income of an Indian was Rs.  249 was the same.

However, it should also be noted that since independence, the average Indian's annual income has increased 542 times.  At present the per capita annual income of the country is 1 lakh 35 thousand 50 rupees.  Is equal to.  That means 11 thousand 254 rupees per month.

4. How much poverty has decreased in the country after independence?

Now it is understood that if income has increased then poverty has also decreased.  However, let's try to understand through statistics how much poverty has decreased in the 73 years since independence.  When the country became independent, 80 per cent of the total population i.e. 25 crore people were living below the poverty line.

Systematic registration of the number of poor began after 1956.  The BS Minhas Commission submitted a report to the Planning Commission.  According to this, it was estimated that in 1956-57, 65 per cent of the people in the country i.e. 21.5 crore people were living below the poverty line.

Now let's look at the statistics.  The latest poverty line figures are available only up to 2011-12.  Accordingly, 26.9 crore population of the country is still below the poverty line.  That means 22 percent of the population is still poor.  As a result, 58 per cent people have come out of poverty since independence.