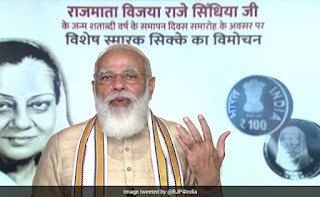 Vijaya Raje Scindia was a decisive leader and an able administrator.

Prime Minister Narendra Modi this morning released a special ₹ 100 coin to honour the legacy of Vijaya Raje Scindia, founder leader of the ruling BJP, on her 100th birth anniversary. Linking his slogan for a self-reliant India (Atma Nirbhar Bharat) to her legacy, the Prime Minister said: "A secure, safe and prosperous Bharat was Rajmata's dream. We will realise this dream with a self-reliant India."

Vijaya Raje Scindia was "a witness to India's key political events from independence struggle to decades after the country's independence", PM Modi said. "In the last 60 years, Rajmata Scindia was one of the key political figures who showed the direction. She was a decisive leader and an able administrator. From burning of foreign clothes before the independence to Ram Mandir Andolan, her experience had been vast," he stressed.

"It's so wonderful that the Ramjanmabhoomi that she struggled for, that dream too has been realised in the year that marks her birth centenary," PM Modi said at a virtual ceremony held to release a commemorative coin.

"She proved that service of public (Jan Satta) is more important than holding on to power (Raj Satta). She was a royal yet she spent important years of her life in prison. During Emergency, she wrote a letter to her daughters," PM Modi shared.

Recalling the contents of the letter, the Prime Minister said she gave a key lesson that the "future generations should be able to draw an inspiration as we make sacrifices while dealing with our current struggles".

Earlier this year, Vijaye Raje Scindia's grandson - Jyotiraditya Scindia - had ended his decades long association with the Congress to join the BJP.

BJP MLA Yashodhara Raje- Vijay Raje Scindia's daughter and Jyotiraditya Scindia's aunt - had praised Mr Scindia for a step "taken in (the) national interest" and called it a "ghar wapsi (homecoming)". "This is ghar wapsi (home-coming). The way he has been welcomed by Prime Minister Narendra Modi and (Union Home Minister) Amit Shah shows their respect towards Rajmata (Vijaya Raje Scindia)," she had told reporters.