Satya Na Prayogo Athva Aatmakatha Read in PDF and Listen as a Audio Book | Useful Material :- The online Gandhi Heritage Portal saves, secures, and disperses unique works of Mohandas K. Gandhi and makes accessible to the world the enormous corpus of "Central Works" which are helpful for any extensive investigation of the life and thought of Gandhiji. Gandhiji was 24 years of age in South Africa "Natal Indian Congress " made in 1894. 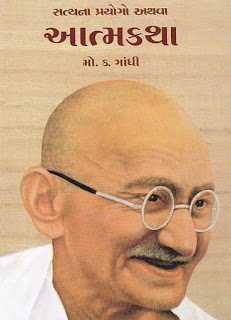 The Government of India and its Ministry of Culture, following up on the suggestion of the Gandhi Heritage Sites Committee headed by Shri Gopal Krishna Gandhi, gave the obligation of conceptualizing, structuring, creating and keeping up the Gandhi Heritage Portal to the Sabarmati Ashram Preservation and Memorial Trust.

The Collected Works of Mahatma Gandhi (100 volumes), Gandhiji No Akshar Deha (82 volumes) and Sampoorna Gandhi Vangmaya (97 volumes) structure the fundamental structure around which the Portal has been created. The key writings give first releases of the Key Texts of Gandhi.
Read Book: Click here