Beranda » News » NGT issues notices to 18 states, including Gujarat for control of pollution and ban on the use of fireworks | News

NGT issues notices to 18 states, including Gujarat for control of pollution and ban on the use of fireworks | News

NGT issues notices to 18 states, including Gujarat for control of pollution and ban on the use of fireworks | News 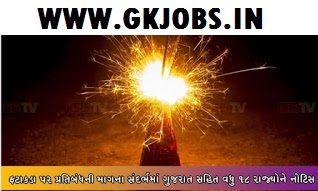 The National Green Tribunal (NGT) has sought answers from 14 states in response to petitions seeking control of pollution and ban on the use of fireworks for the health of the people. Notices were earlier sent to Haryana and Uttar Pradesh. They have not been asked to respond as the Odisha and Rajasthan governments have issued notifications banning the sale and use of fireworks.


The NGT sought answers from these states

Notices have been sent to these states asking why fireworks should not be banned in view of pollution. The tribunal said in its order that all the states where the level of pollution is not satisfactory should consider banning fireworks like Rajasthan and Odisha.

Earlier on Monday, the tribunal had sought a reply from the Union Ministry of Forests and Environment, Central Pollution Control Board, Delhi Pollution Control Committee on the demand for ban on fireworks between November 8 and 20 for pollution control and public health. The bench also sent notices to the Delhi Police Commissioner, Haryana, Delhi and Uttar Pradesh governments seeking their response.