Beranda » tech » Names of 2 crore farmers removed from the list, is your name in PM Kisan Yojana or not? | Full Detail

Names of 2 crore farmers removed from the list, is your name in PM Kisan Yojana or not? | Full Detail

Names of 2 crore farmers removed from the list, is your name in PM Kisan Yojana or not? | Full Detail :- The Center has removed 2 crore farmers from the PM Kisan Samman Nidhi Yojana, which provides Rs 6,000 crore to farmers across the country. The government is currently transferring Rs 2,000 in the seventh installment to the farmers’ accounts. After removing the names of these farmers, the government is also cracking down on bogus farmers. Due to this such farmers have been removed from the list. 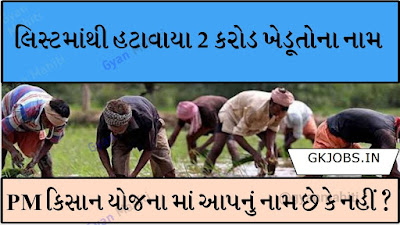 At present, the number of farmers availing the scheme in the PM Kisan portal is around 99.7 million as against 11 crore a few days ago. The installment has started from December 1.

The government pays an installment of Rs 2,000 every four months. Under this, Rs 2,000 has been coming into the farmers’ account since December 1. Bogus farmers were also taking advantage of the scheme. After which the government started recovery from such farmers who were not eligible for the scheme. So far, most such cases have come from Maharashtra, MP and UP.

It is believed that farmers who made fake entries in several states for fear of recovery have deleted their names while millions of farmers have been removed from the portal due to their incorrect data. The number of farmers benefiting from the scheme is declining as the installment progresses. According to the PM Kisan portal, the first installment was received by 10.52 crore farmers.

The investigation has revealed that a total of Rs 208.5 crore was given to such farmers. Now the government is going to recover this amount from them. At the same time, the accounts of 5.95 lakh beneficiaries were checked in Tamil Nadu, out of which 5.38 lakh were bogus.

The government is recovering from such people. Similar scams have been reported in several other states, with millions of ineligible farmers taking advantage of the scheme

0 Komentar untuk "Names of 2 crore farmers removed from the list, is your name in PM Kisan Yojana or not? | Full Detail "